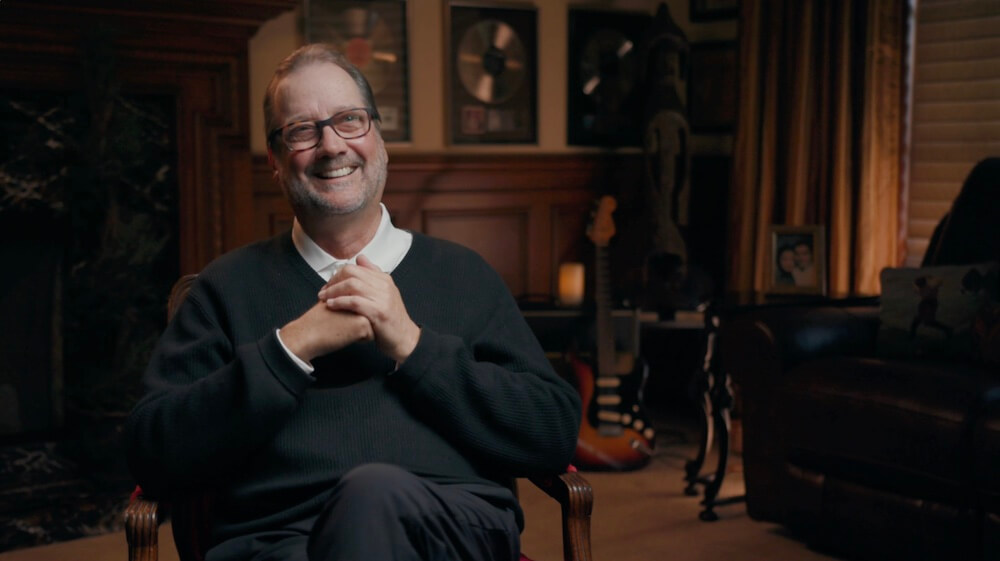 Eternal Flame, written by Angie Klink, directed by Jack Klink and narrated by actor Peter Coyote, documents how Tom Kelly, member of the Songwriters Hall of Fame, carried his father, Bob Kelly’s musical torch to great heights and paid it forward to inspire generations to come.

Tom is one of the most successful songwriters of the past 25 years. Along with lyricist Billy Steinberg, he wrote five consecutive Billboard #1 hits from 1985 to 1989: Madonna’s "Like A Virgin," Cindy Lauper’s "True Colors," Heart’s "Alone," Whitney Huston’s "So Emotional" and The Bangles’ "Eternal Flame."

Today, the Bob Kelly Performing Arts Center at West Lafayette High School in West Lafayette, Indiana, stands as a testament to the Kellys’ burning musical passion and serves to spark the joy of music in young people. Rise Above the Mark

Angie Klink worked with the director of the public education documentary Rise Above the Mark to select excerpts from hours of footage. She wrote a narrative that weaves together the struggles experienced by teachers and students with the possible remedies to those difficulties offered by several experts in the field. Klink’s compelling and engaging script is brought to life by narrator, actor Peter Coyote. Cafe Literato in West Lafayette, Indiana, wanted a TV commercial that captured the ambiance of their casual urban-style eatery and food with fresh good-for-you ingredients. Video and editing by Jacklink Productions Purdue University’s College of Health and Human Sciences needed a short video for use in social media and other venues that would appeal to potential students. They requested and we deliver engaging images and copy that resonates with the millennial generation, many of whom desire a career that will better people’s lives and the world. The goal for the Vision Floors and More TV spot was to evoke a sophisticated mood and connect to the viewer with the theme that a home is where our life story unfolds, while we show the beautiful flooring, kitchens, baths and more that the business creates. The owners of Red Seven Bar & Grill wanted to capture the essence of their restaurant’s décor in their TV ad. They described their décor as “mad scientist meets professor’s library.” Klink’s script delivers that vibe, as it entices viewers to stop in. Keystone Architecture wanted a TV ad to show how they design a building from the proverbial “napkin sketch” to a computer-designed rendering to final construction. The images flow, as they engage the viewer. The copy pops in perfect accompaniment. Franciscan St. Elizabeth Hospital wanted a proposal video to present the idea of its opening a northern Indiana location. Klink’s script describes the advantages of opening the location. The City’s Economic Development Department wanted a video to explain the benefits of tax-increment financing (TIF) at the annual meeting of Indiana mayors. Klink’s copy for the voice talent explains the TIF concept and includes several excerpts from interviews. The proprietors of Walt’s Other Pub requested a TV commercial with a “big chain” look, while emphasizing their locally owned vibe and service. The quick camera shots and driving music called for the voice talent to deliver Klink’s copy in short bursts, as it emitted an easygoing invitation to stop in. Lafayette Savings Bank wanted a short video about its 145-year history to show the staff and board of directors at its annual winter party. The video combines old and new photos with a voiceover that pulls the bank’s timeline along with Klink’s engaging story of the institution’s brand.

Purdue University Press, the publisher of Angie Klink’s The Deans’ Bible: Five Purdue Women and their Quest for Equality, wanted a book trailer to promote the publication on YouTube, social media and more. The trailer was first presented at a book launch hosted by Purdue University Libraries in March 2014. Tecumseh Junior High School needed a video to explain to parents and students the concept of student-led conferences. Essentially, Klink’s copy was a “how-to” that simplified the process. William Digby was the founder of Lafayette, Indiana, and he named the city after the Marquis de Lafayette in 1825. At that time, Marquis was touring the United States, being honored by Americans as a hero during the American Revolution many decades before. In this video spoof to promote downtown, Will and Marq make their debut by interrupting Mayor Tony Roswarski at a press conference, where the mayor is announcing that “Downtown is Open for Business” during the Main Street Revitalization project, called “Streetscape.” The humorous script reflects the crusty character of Digby and the refined persona of the Marquis. Will and Marq continue their tour of downtown Lafayette, Indiana, stopping at local watering holes. Will and Marq begin their adventure down Main Street in Lafayette, Indiana, by visiting two restaurants—Lafayette Brewing Company and Bistro 501. The script plays on the juxtaposition of the two personalities.

All videos were shot, directed, and edited by Jack Klink of JacKlink Productions.